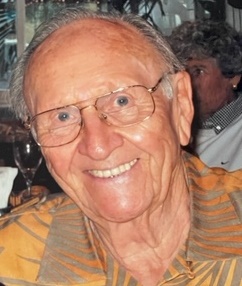 This week, the world mourns the loss of another one of the Greatest Generation, our father, Bud Urban. It is with sadness we announce his passing.

Bud’s life as the youngest of 11 children taught him the need for hard work and discipline to keep the family together during the Great Depression. His mother was a seamstress and found time to make wedding gowns for the ladies who lived in town.  She even made a Peter Pan costume for him when he was chosen for the part in a grade school play.  All of the Urbanski children played a musical instrument, and he recently told us he performed a violin solo at Christmas Mass.

As a teenager, Bud played ice hockey, and led a typical young man’s life in a small town during the early 1940s.  When the news of Pearl Harbor’s bombing reached the community, he, along with most of his classmates knew they would be following a different path than they had envisioned for themselves.  Upon graduation from high school, he entered the United States Marines the spring of 1942 at 17 years of age.  He served with honor in the Pacific Theater from 1942 to 1945, fighting for our country’s freedom on the Islands of Pelau, Mariana, Vanatu, and the Solomon Islands. As many veterans of the war, he rarely spoke of his experiences.  In recent years he related a few stories, one of which expressed the feelings that must have been shared by many young men in his position.  He said he recalled being in the trenches during a fierce battle, and saying to himself, “I hope I can be brave enough.” During his three years of service, Bud’s leadership and organizational skills were quickly recognized and he was promoted to Master Sergeant.

Shortly after the Japanese surrendered in August of 1945, Bud was given an honorable discharge from the Marines.  Not quite 21 years old, what would he do with the rest of his life? Visiting family in Wisconsin was first on the list. From there, one notable job working in a gold mine in Colorado provided more character-building experiences.  His story of spending a month alone in a cabin during a blizzard with just enough rations and firewood to last until the rest of the miners made it to him made a riveting tale for family members one evening not too long ago.

After working at various jobs throughout the country, (one at a 3M Company shingle factory for 63-1/2 cents an hour on the night shift), he learned of an interesting job opening from his brother-in-law.  Oakton Manor in Pewaukee, Wisconsin was in need of a night auditor, and with Bud’s outstanding math skills and attention to detail, he was hired by Sid and Bert Shinderman to fill that position on July 4, 1947.  He quickly became an essential part of their organization and eventually became General Manager at Oakton Manor Resort.  After his marriage to Theresa, he and the family moved to Genoa City in 1956. He and Theresa became co-owners of Nippersink Manor Resort with the Shindermans and Harry and Vi Lake until its sale in1982.  He and Theresa moved to Florida where he pursued his hobbies of fishing and golf for 34 years.  In 2016, he and Theresa moved to Cumming, GA in to be near family.

A Mass will be held on Thursday January 6, 2022 t 11:00AM at St. John’s Catholic Church 701 N. Lake Avenue, Twin Lakes, WI. The family will receive friends from 10:00AM until time of services the church.    Following mass, there will be a grave side service at Mound Prairie Cemetery, 3900 – 104th Street, Genoa City, Wisconsin.