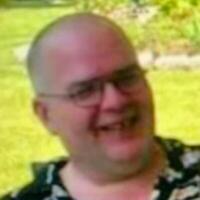 Kevin was born on June 19, 1960, in Kenosha, the son of the late Darel and Lucille (Riley) Lain. He was educated in the schools of Kenosha. Kevin worked at a warehouse doing factory work for many years. He was a member of St. Casimir Catholic Church. His hobbies included listening to music, cheering for the Chicago Bears and the Chicago Cubs, but most of all he loved spending time with his friends and family.

Survivors include his brother, Randy (Terry) Lain of Kenosha; sisters, Mary Lain of Racine, Gail Smith of Kenosha, Rita (Pat) McGrain of Pleasant Prairie, Karen Lain of Kenosha; he is also survived by many other friends and family. Kevin was preceded in death by his parents, niece, Michelle Smith and 2 brothers, Jerry & John Lain.