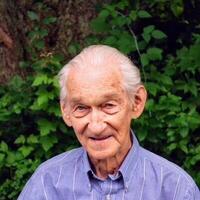 Kermit was born on May 27, 1933, in Britt, Iowa, the son of the late Kalmer and Ollie (Moss) Hovey.  He was educated in the schools of Iowa and Wisconsin.  Kermit married Dorothy Unwin, his beloved and loving wife of 63 years, on June 18, 1955, in Kenosha.

After occupations as a full-service gas station owner/operator and a transit bus driver he started as a press operator at White Welding/Powerbrace. Thirty years later he retired from there as a Quality Control Inspector.  Always a resourceful jack-of-all-trades, he gardened, woodworked, roofed, paved, and repaired nearly anything – from cars to tvs.  Most of all he loved spending time with his family, especially his grandchildren and great-grandchildren.

A visitation will be held at Kenosha Funeral Services at 10:00 am September 26 with funeral services to follow at Noon, interment at Sunset Ridge Memorial Park, and luncheon afterwards.