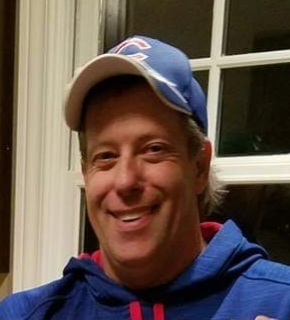 Kenneth A. McEvilla, 54, of Winthrop Harbor, IL, passed away unexpectedly on Sunday, April 3, 2022, in Louisville, KY.

Born in Chicago, IL, on October 11, 1967, he was the son of Robert McEvilla and Candy (Paschelke) Coffey.

Ken worked hard and played harder. As he always said, “I’m a toys r us kid, I’ll never grow up!” Ken loved classic cars, car racing, riding his motorcycle, and playing baseball. On any given weekend you were sure to find him at a car show, at the track, or on a ball field and always accompanied by his family and friends. He was an amazing husband, father, stepfather, brother, son, uncle, and friend.

His mother recalls some of her favorite memories …
• At 2 yrs old he would rock himself in the crib. One time about midnight someone was knocking on our door, it was the Chicago Police Dept responding to a noise complaint from the apt under us. After some talking, we took them to Ken’s room…. there he was rocking in his crib! The Police couldn’t believe that they had called the Police about a baby!
• At about 3 yrs old his grandpa had bought him a battery-operated Dune Buggy. Ken would stack up the 3-4″ Chicago Business Directories under the front end then lay on his back underneath pretending to “fix” it.
• The big red fire truck I bought him after he had his tonsils out at 6 yrs old
• His First Communion
• The first year he played baseball. Coach had put him in the outfield where at 6 yr old kids couldn’t hit that far. He sat on the grass pulling daisies.
• His first job was washing dishes at the Rustic Manor Restaurant.
• Getting Employee Award for the month of August at McDonalds
• His awards for baseball, indoor/outdoor track, and wrestling.
• He loved working on cars and restoring them
• He was a loving brother to his sister and brother. Protective of Charlotte when an older child (at the babysitters) took her doll away, Ken took it back for her. When John was in college and money was tight, he replaced parts to help keep his vehicle running. One time even buying tires for his truck .
• He loved his daughter and grandchildren
• Finding the perfect wife for him in Robyn and loved her so much.
He was always loved and will always be missed.

His sister, Charlotte, remembers Ken fondly. “Ken was smart, good to his family, often able to serve up a quick-witted remark to get us all to laugh. He enjoyed fast cars, working on them, and at times racing them. He liked a good pool hall game. He was light and fun, all with a big heart.”

His brother, John, shares one of his favorite memories. “We were playing in a championship game. The opposing team was all Carthage college baseball grads and the guy pitching had pitched in AAA (just under major league). Kenny must be 40 at this time. I’m in the 7th inning of a very tight game. I’m pitching inning for inning with this guy. I’m stressed. We need base runners. We need men on base. Guess who leads off the inning. Kenny! Not only is he facing a former pro, but he also had a hard at bat that resulted in a walk. Kenny fouled off several pitches. The pitcher couldn’t beat him. He drew his walk. Then proceeded (without a sign) to steal second base. The game is tied, no one would give a steal sign. Kenny does it anyway and he is safe! Alright we have a guy in scoring position, all because of Kenny, in this championship game. Guess what Kenny does next. He steals third base. A timely hit after that and we take the lead. Never happened without Kenny.” This story says so much about who Ken was; a team player, not a quitter, worked great under pressure, risk taker, and authority dis-liker.