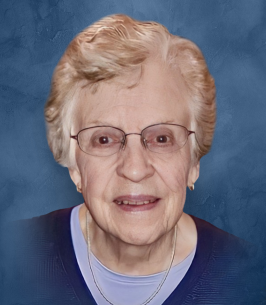 She was born July 13, 1931, in Chicago, IL the daughter of the late Martin and Helen (Ninneman) Benzinger. On December 15, 1951, she married Charles Fleming in Chicago, IL and he preceded her in death in 2014. She lived many years in Chicago, and raised her children in South Holland, IL. In 1992, she and Chuck moved to Algonquin, IL and settled in Kenosha, WI in 2006.

From 1949-1953, June worked as an administrative assistant for the Chicago Board of Trade, and later as a secretary at Specialty Steel. June also volunteered at Kenosha Memorial Hospital for 10 years.

She was an avid Chicago Cubs and Blackhawks fan, and enjoyed puzzles, cooking, and baking. June cherished time spent with her children and grandchildren.

In addition to her parents and husband, June was preceded in death by her twin sister, Joan Buck, her sister, Teresa Sheckles, and brothers, Leo Grant, and Marty Benzinger.