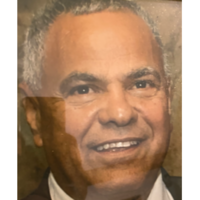 Julio Massa, 79, of Kenosha passed away on Tuesday August 3, 2021 at Kenosha Estates surrounded by his loving family. Julio was born on June 5, 1942 in Puerto Rico, the son of the late Ramon & Ana Maria (Sanchez) Massa.  He was educated in the schools of Puerto Rico.  He was a member of the U.S. Army.  Julio married Hirginia Gonzalez in April of 1991 in Chicago.  He was self employed for many years rehabbing and flipping houses.His hobbies included cheering for the Packers, traveling, cooking & having a cold beer, but most of all spending time with his family & friends, especially his grandchildren. Survivors include his wife, Hirginia Massa of Milwaukee; daughter, Marisol (Noel) Polanco of Gurnee; step-children, Anibel, Jose, and David Garcia; sister, Ana Maria; and 3 grandchildren.  Julio was preceded in death by his brother, Junior, and sister Ana Serrano. A celebration of life gathering will be held on Saturday August 7, 2021 at Kenosha Funeral Services from 3:00PM-5:00PM, with memorial services to follow at 5:00PM.