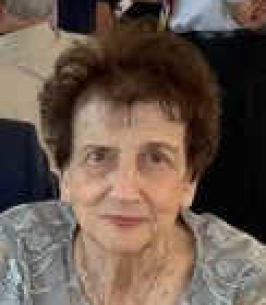 There’s a new angel watching over us. She probably is already causing chaos up there. Judith “Judy” Francois, 85, of Kenosha, WI, passed away on Thursday, June 30, 2022, at her home surrounded by her loving family.

Born on September 21, 1936, in Milwaukee, WI; she was the daughter of the late William and Marietta (Borgo) Moll. She graduated from Rufus King High School and later earned her bachelor’s degree in Biology from Northland College.

Judy met James Francois at Northland College in Ashland. Jim was in the cafeteria after football practice and noticed Judy at a table. He made eye contact with her and mentioned to one of his teammates how beautiful she was and that he was going to marry that woman.

They were married on June 18, 1957, at St. Agnes Catholic Church in Milwaukee. They have lived in Kenosha for 62 years.

She was preceded in death by her parents; two brothers, Thomas and Richard Moll; one sister, Rita Hughes; and two children, Suzanne, and Peter Francois.

Prayers will be held at Proko Funeral Home on Saturday, July 9, 2022, at 9:30 a.m. A Mass of Christian Burial will be celebrated on Saturday, July 9, 2022, at St. Mary’s Catholic Church at 10:00 a.m. Interment will follow at St. James Cemetery. A visitation will be held at the funeral home on Friday, July 8, 2022, from 5:00 p.m. until 7:00 p.m. In lieu of flowers, memorials to For Pete’s Sake through St. Joseph Catholic Academy and St. Mary Catholic Church, would be appreciated by the family.