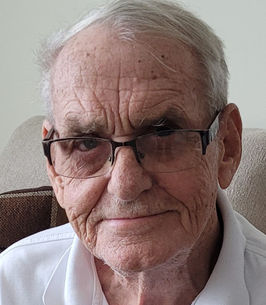 He was born August 19, 1931, in Mishawaka, IN, the son of the late Sharman and Gertrude (Lieske) Goodland, and grandnephew of Wisconsin Governor, Walter S. Goodland. John grew up in South Bend, IN and attended the University of Wisconsin – Madison where he earned his Bachelors and Juris Doctor degrees. He was a member of the Wisconsin National Guard. On April 19, 1958, John married Karen Kinzie in La Crosse, WI and she preceded him in death in 2015. John lived in Stevens Point, WI, the Madison, WI area, Elm Grove, WI and Brookfield, WI. He was also a nearly 50 years winter resident of Ocean Villas in Tequesta, FL.

John worked as a savings and loan attorney for several firms over his career. He served as President and Director of Sunset Playhouse, Elm Grove, WI, he was active in the community with Coach House Village Association in Brookfield, and the Jupiter Beach Road Association. In his younger years, he was an active member of St. Edmond Episcopal Church, Elm Grove, WI; he was also very active with the Boy Scouts of America, and earned the rank of Eagle Scout, which he was most proud of. John was a Goodland family fourth generation Wisconsin attorney, and he authored; Mortgage and Land Contract Foreclosures in Wisconsin.

In addition to his parents and wife, John was preceded in death by two sisters, and a son, Greg Goodland.

Funeral services and interment will be private at this time. Arrangements were entrusted to Proko Funeral Home. Please consider a gift to Sunset Playhouse in Elm Grove if you so desire to honor his legacy.