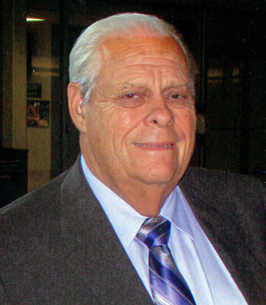 He was born April 11, 1940, in Kenosha, WI, the eldest son of the late John and Adeline (Widmar) Cibrario. He attended local schools and participated in sports to the highest degree. He graduated from Mary D. Bradford High School in 1958 and went on to attend LaCrosse State University. He graduated with a bachelor’s degree in mathematics in 1962. Right before graduating high school, he met Rosemary Zarletti, who would become his lifetime partner and love of his life for fifteen days short of their 60th wedding anniversary. They had a fun-filled and very special courtship for four years, and wed on June 23, 1962, at St. Mary Catholic Church, Kenosha, WI.

John taught mathematics for 38 years at Bradford High School, Kenosha, WI retiring as head of the mathematics department. During his tenure, he was head coach of baseball for 33 years (the longest term in the school’s history), and football for 15 years. John was inducted into the Wisconsin Baseball Coaches Hall of Fame for excellence of coaching and meritorious services to the game of baseball in the State of Wisconsin; the Bradford High School Distinguished Alumni Hall of Fame in the areas of Education and Athletics; the Old Timers Baseball Hall of Fame; and the Kenosha Bradford and Tremper High School Sports Hall of Fame for outstanding achievement and having provided an impressive model of excellence for youth to follow in the future. He was awarded Teacher of the Year in 1981 and in 1994, he was presented an award from Sportainment for 30 years of coaching. He was an exceptional coach, teacher and mentor to hundreds of students as well as his sons and grandchildren for all of his years, even after retirement.

He was an avid golfer and sports enthusiast throughout his life, as well as a volunteer for just about everything and anything that needed his expertise. He will be sorely missed by the community he lived and grew up in and those whose lives were touched and shaped into something better for having him as a part of their lives. After retirement, he and Rosemary enjoyed winters in Arizona for 20 years, touching even more lives and easily becoming a friend to all he met. John truly loved his family and the Lord and enjoyed spending time with them, sharing many stories along the way.

In addition to his parents, John was preceded in death by a brother, William Cibrario in 2020 and a brother-in-law, Larry Zarletti in 2013.

Visitation will be held from 9:30 a.m. – 11:30 a.m. on Tuesday, June 14, 2022, at St. Mary Catholic Church, 7307 40th Avenue, Kenosha, WI. Mass of Christian Burial will commence at 11:30 a.m. Entombment will follow in All Saints Mausoleum, Pleasant Prairie, WI. In lieu of flowers, those desiring may make contributions to St. Jude Children’s Research Hospital, St. Mary Catholic Church, or Hospice Alliance, in his memory.