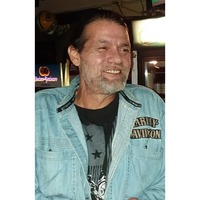 He was born on November 20, 1965 to the late John and Patricia L. (Branaman) Cisneroz in Waukegan, IL.  He was educated in Waukegan and graduated from Zion-Benton High School.

On August 10, 2019 he married Lawona Chandler in Kenosha.

Joey was a carpenter by trade and worked as the shipping dock coordinator for Niagara Bottling Company.

Joey loved wrestling and the WWE, an avid Bears fan, going to Cheese-A-Palooza, camping, the outdoors, rock music and listening to karaoke.

Joey is survived by his wife Lawona, his children Crystal, Jacob, Travis, Maia, Anna, Sinthya, Katherine and Corbit, his sisters, Michelle M. Cisneroz-Garcia and Lisa (Paul) Turner, his stepfather Richard McGillivary, his 12 grandchildren, his one great grandchild with one on the way, his sisters-in-law Taja (Daniel) Chandler, Toni (John) Chandler and Candy (Steve) Bergman and his brothers-in-law George (Miranda) Schlitz, Donny (Ruth) Chandler and Eddie (Paula) Chandler.  He is also survived by his nieces and nephews Eddie (Brittney), Erik, Sean, Cassandra, Stephanie and DJ.

He is preceded in death by his parents, a son Joseph Alan Cisneroz and his grandparents Merle and Donna Branaman and James and Ruth McGillivary.