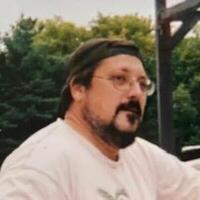 John Dutton, 62, of Kenosha passed away on April 24, 2022, at Froedtert hospital in Milwaukee.

Johnny D – The Man, The Myth, The Legend, was born on February 12, 1960, in Waukegan, IL the son of Jack and Lucille (Michalski) Dutton. John was employed by a local steel company for many years before retiring. His hobbies included spending time with family especially his grandchildren, and ‘ballroom dancing’ with his friends. He was always willing to help fix anything that needed to be fixed and was an excellent handyman.

This is not his first brush with death. The first time was when he carved his initials into his mother’s new furniture when he was 7-yrs. old.  Johnny was saved by his one and only loving ‘Sis’ and become the man we all know and love today.

John is survived by the best daughters in the world, Pamela Dutton of Arizona, Tiffany (Belal Alchaar) Dutton of Kenosha, Samantha Dutton of Michigan, his beloved Sis LuAnn (Don) Schmidt of Winthrop Harbor, four beautiful grandchildren Aryston, Todd, Zack, and his baby girl Nadia. He is also survived by a handful of brothers made by life-long friendships. John was preceded in death by his parents Jack and Lucille (Michalski) Dutton, and the man’s best friend Cody. He will be missed by many, forgotten by none.

A celebration of life, or as he would put it a ‘safety meeting,’ will be held for friends and family Tuesday May 3, 2022 at Kenosha Brewing Company at from 5-7pm.

In lieu of flowers please consider donations to the family for final expenses.