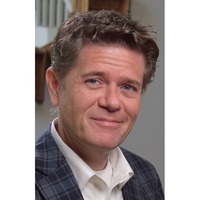 Jerry Thomas Gulley II, loving husband, father and local leader, passed away on May 19th at the age of 53 due to complications from a heart attack.  He is survived by his husband, James Schend of Pleasant Prairie, their seven foreign exchange sons, two nieces and two nephews.

Born on Sept. 18, 1968, in Kingsport, TN, Jerry graduated from East Tennessee State University and the Culinary Institute of America. In 2014, Jerry and James were married in San Francisco but were committed partners for over 28 years.

After settling in Pleasant Prairie, WI, they welcomed 7 young men into their home over 7 years through the AFS Foreign Exchange Program. Jerry also served as Orientation Coordinator for AFS in the greater Milwaukee area, personally welcoming and working with hundreds of international students and their host families.

Empowering people to better themselves was Jerry’s gift and passion. As Chief Education Officer and part owner of EdLogics, a digital health education company, he raised health literacy among client organizations, giving individuals the knowledge tools to better their health outcomes.

As a Kenosha County Board Supervisor serving on the Human Services and Judiciary and Law committees, he focused on ways to improve services and policies to help all Kenosha County residents. Jerry voted according to his strong moral compass and worked on numerous initiatives. He was very proud to help form the Racial & Ethnic Equity Commission, which has the goal of addressing issues of inequity in Kenosha County government. Most recently, he entered the race for Kenosha County Executive, bringing together a diverse and powerful coalition of people.

Jerry seized every opportunity to give back to his community. He believed in the power of mentoring, consistently meeting with numerous Nash Elementary School students on a weekly basis, giving them his undivided attention, strength and wisdom. He also served on the board of directors for the Kenosha Public Market, as well as volunteering at the market every Saturday.

Of all his accomplishments, Jerry’s involvement with AFS was something he especially treasured, and he took the opportunity to father each of his sons with great joy. His family asks that, if you are so moved, you make a donation in Jerry’s name at AFSUSA.org in his memory.

A memorial service will be held Saturday, June 18th, at the Anderson Arts Center, 6603 3rd Ave., Kenosha. Visitation will be held from 10 a.m. to 1 p.m. immediately followed by services for friends and family.