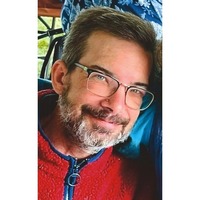 He was born January 16, 1968, to Ronald and Janice (Adler) Cramer on a military base in Stuttgart, Germany, where his father was serving in the Army Corp of Engineers. Jeff was educated in the Racine Unified School District, attending Fine Arts and Park High School. In addition, he studied theatre at the University of Wisconsin Parkside, where he met his wife, Lizz Otto, and they married in August of 1995. Together, they moved to North Carolina, where Jeff would earn his Bachelor of Fine Arts degree in lighting design from the University of North Carolina School of the Arts. Jeff and Lizz welcomed their son Wolfgang (Wolfie) in April of 2004.

Jeff worked as a project manager for Altounian Construction in Lake Forest, IL, where he enjoyed designing bathrooms, kitchens, church pews, an indoor ice rink, and many other exciting projects. He frequently expressed his delight at finding his dream job, and his gratitude to the company for their trust and support was boundless. Before Altounian, Jeff installed theatrical counterweight systems and mechanical hoists in theatres and stadiums around the country. Universal Studios Hollywood employed him as the Assistant Technical Director for the Halloween Horrors Nights, where he enjoyed creating the macabre to thrill the crowds.

Jeff was a unique and intelligent individual who simultaneously embraced beloved traditions while pushing boundaries. He valued family, good friends, nature, and travel. Jeff found a passion for photographing insects throughout southeastern Wisconsin and shared his photos on iNaturalist. Additionally, his work has been featured in a calendar and an entomology textbook.

His grandparents Conrad (Bud) and Margaret Adler, a beloved uncle Thomas Adler, and several good friends proceeded him in death.

The family will hold a private graveside service at this time, but a celebration of Jeff’s life will take place in August of this year at Richard Bong State Park. A memorial bench will be placed in his honor beside one of the many trails Jeff frequented. Donations for the bench can be made directly to the family.

The family would like to thank Dr. Mullane, hospice nurse Kathryn and the staff of Aurora at Home Hospice for their loving and compassionate care given to Jeff.