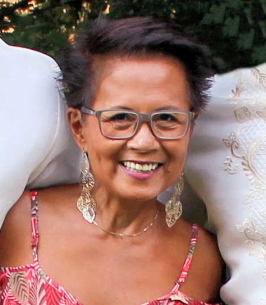 Jeannette Q. Brinkman, 63 years old passed away Sunday, October 17, 2021, at Agrace HospiceCare, Janesville, WI with her family at her side.

She was born July 2, 1958, in Manila, Philippines, the daughter of Vincent and Inezita (Vargas) Quevedo. She grew up in Manila and moved to Bloomington, IL in 1970 with her four siblings. Jeannette graduated from University High School in Normal, IL where she was a cheerleader, President of the Spanish Club, and played volleyball, badminton, and basketball. She went on to graduate from Illinois State University, Normal, IL in 1980, where she completed a Bachelor of Science degree in Home Economics, specializing in Dietetics and was a member of the Delta Delta Delta Sorority and the Gamma Phi Circus. Jeannette then relocated to Peoria, IL in 1981 to take part in a Dietetic Internship, where she met her future husband, Stephen Brinkman, and then onto Chicago, IL from 1982-1984. She lived in various towns in Michigan over the next five years. On August 27, 1988, she and Steve were united in marriage. They settled in Kenosha, WI from 1989 until 2011. In 2010, she completed her MBA in International Business at Marquette University, Milwaukee, WI.

From 1982 until 2005, Jeannette was employed by SAGA Foodservice, Marriott, and Sodexo in the capacity of Dietician, Food Service Director, and regional Human Resource Director. She had a fruitful career that resulted in her working for many years as Vice President of Human Resources for companies that moved her and Steve to Houston, TX, Adelaide, Australia, and finally Janesville, WI (2016).

Jeannette loved spending time with Steve and their daughter, Kylee as well as family and friends. She was a connoisseur of food, whether it was eating, cooking, critiquing, admiring, or enjoying, Jeannette loved dining out. She also enjoyed traveling, scrapbooking, and dancing.