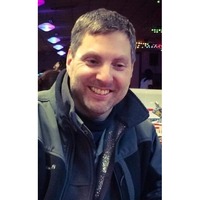 He was born on December 29, 1970 to George and Barbara (Homes) Klemm in Kenosha.  He was educated in the schools of Kenosha and graduated from Tremper High School. He also attended Grayslake College in Illinois.

On September 3, 2004 he married LeeAndra Woodward in Kenosha.

Jason was a CDL driving instructor for 160 Driving School and Roadrunner.  He was a police officer for the Kenosha County fair police.

Jason was a member of Great Lakes Church in Kenosha.

Jason loved going to church, shooting, hunting and bowling. He earned a black belt in karate. Most of all, he loved spending time with his family and friends.

Jason is survived by his wife LeeAndra, his sons Tyler and Zachary, his father George (Bonnie) Klemm, his twin brother Geremy (Ginger) Klemm, his brother Michael (Reina) Schlosser and his sisters Heide McKinney, Lisa (Steve) Kumm and Yvonne Schlosser.  He is also survived by many nieces, nephews and cousins.

He is preceded in death by his mother Barbara.