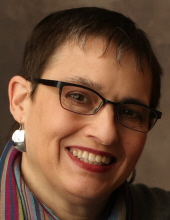 Janet passed away suddenly and unexpectedly on May 2, 2022.
The daughter of P Carson and Edna (Griesbach) Rohde, Janet was born January 20, 1961, in Kenosha, Wisconsin.

She married Mark Fisher on June 4, 1983. They met working at a McDonald’s in high school. They cherished their life together.

Janet forged her math and science skills for 15 years as a software engineer at Barber Coleman in Rockford, Illinois, and at Allen Bradley in Milwaukee, WI, where she designed industrial control systems, computer graphics, and database systems. Early in her career, she also mentored new graduates, which would become the foundation for much of her teaching and advocacy for young people. She also received the Rockwell Automation Innovation Award and was one of the company’s first tele-commuters when her family moved to Highland Park, Illinois.

While raising their daughter Hannah, Janet became a tutor and mentor for academically promising, need-based students through Chicago-based SQ Scholars. She was instrumental in shaping the values and direction of this scholarship program, including tutoring Math and Science college prep and developing hands-on STEM programs. Janet also served 17 years as an academic tutor in high school math and science, as well as a private tutor for standardized college test preparation.

Janet’s spirituality was as much a part of her life as teaching and tutoring young people. As an active member at Gloria Dei Lutheran Church, she led her church high school youth group for over 20 years and has accompanied teens on service, social justice, and mission trips to cities across the U.S. In 2009, she was selected as the volunteer of the year by Thrivent for her thousands of hours of volunteer service. Her faith was a huge undercurrent in her life, which helped her stay strong and positive through many health challenges.

An avid quilter, Janet participated in fundraising for Lutherdale Bible Camp in Elkhorn, Wisconsin, by volunteering her time to make quilts for their annual fundraiser. Janet also collaborated with other quilters to design and stitch a 150th anniversary commemorative quilt for the City of Highland Park. The work is now displayed in the Highland Park Library.

In all of her communities, Janet recognized people’s individuality and personal strengths. No matter who crossed her path, whatever their abilities, Janet brought a warm and accepting manner to her relationships, bringing every human being she touched to the belief that they matter and that anything is possible. She modeled an amazing life of humility, wisdom, strength, and hope that will live on in all of us.

She will be deeply missed by her husband Mark and daughter Hannah of Highland Park; her brothers Jim (Janine) Rohde and David Rohde, sister Anna (Neil) Kersten; and sister-in-law Martha (Scott) Votava. She was a beloved aunt to Philip (Pinky), Kevin, Tom, and Allison Rohde, Elizabeth (Michael) Letarte, Nick and Jake Votava, and Sarah and Jack Kersten. She was preceded in death by her parents. Memorial visitation Saturday, May 14, 9:30 am until time of service 11 a.m. at Gloria Dei Lutheran Church, 1133 Pfingsten Rd. Northbrook, Interment Gloria Dei Churchyard.

Memorials may be directed to Gloria Dei Lutheran Church or Lutherdale