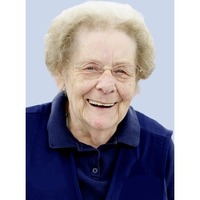 She was born on October 23, 1935 to the late Louis and Josephine (Tadych) Lewandowski in Ashland, WI.  She was educated in the schools of Green Bay.  She received a Bachelor of Science degree from St. Norbert College.

Jane was a member of St. Michael’s Catholic Church in DePere, WI and attended Our Lady of Mount Carmel in Kenosha.

She is preceded in death by her six sisters and one brother.

A Mass of the Traditional Latin Rite for Jane will be held on Friday, September 16th at 11:00 a.m. at St. Patrick’s Roman Catholic Oratory (211 N Maple Ave Green Bay, WI).  Interment will follow at Allouez Catholic Cemetery.  Visitation will take place on Friday from 10:30 a.m. until the time of Mass.  In lieu of flowers, memorials would be appreciated to the Wounded Warrior Project.