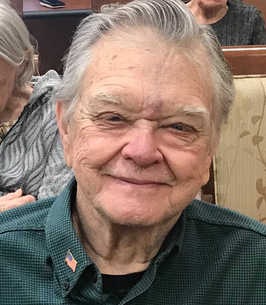 Jim Yorton never took a selfie. Not because he couldn’t (he couldn’t), but because he hated being the center of attention. In a world where self-promotion is as expected as the Packers beating the Bears, Jim was as modest as they come.

Jim’s humble, wonderful life ended on October 17, 2021, when he passed away peacefully after a 7-year battle with Alzheimer’s. He’d hate the spotlight an obituary put on him. So, instead of chronicling all that Jim did and was, we’ll exploit a loophole and share what he never did or was.

Jim never failed to make people laugh and never screwed up a punchline. How could he? He only told nine jokes. Just ask every grocery checkout clerk around town.

Jim never pushed football on his sons or grandsons, though he was a beast on the gridiron. A high school All-American who regularly stole headlines as a two-way lineman at Bradford, Jim was recruited by dozens of major college programs before settling on The University of Miami (go Canes). Years later, Jim was inducted into the Kenosha Football Hall of Fame.

Jim never cheated on his taxes and never used whiskey in his Old Fashioned. Which, in Wisconsin, is worse than cheating on your taxes.

Jim was never a fair-weather friend, to his school buddies or his “OFO” golfing crew.

Jim never forgot the value of a dollar, or his worth as an electrician who provided for his family. He went to work. Always. He was just as faithful to his country, serving honorably as an Army artilleryman.

To everyone’s great annoyance, Jim never cut corners on household projects. Sweeping the garage took all afternoon, and the fun really started after he picked up the dustpan. He’d sweep and scootch that dustpan a quarter inch at least 97 times, clearing the floor to the sub-atomic level. Most operating rooms were dirtier. (Jim was equally dedicated to combing his hair.)

Jim never demeaned a soul or held a grudge.

Jim never missed the chance to hit the beach or the dance floor. He loved the sun and the jitterbug. For a big guy, he could move.

Jim never lost his sense of humor, and his comedic timing was uncanny to the end. On the toughest days, Jim would break up the room with an impeccably timed eyebrow raise or off-color comment. Why be blue when you can go blue?

Most important, of all the things Jim never did, he never stopped loving his life and his family, especially Mary, his wife of 61 years and 17 days. He never gave up. In the end, it was Jim who never said never.

Jim is survived by Mary (Kemen); two sons, Jim Yorton of Chicago, IL and Tom (Maria) Yorton of Barrington, IL; a brother, Jack (Pat) of Winter Haven, FL; and grandsons Shane and Will Yorton. In addition to his parents, Jim was preceded in death by a sister, Betty White.