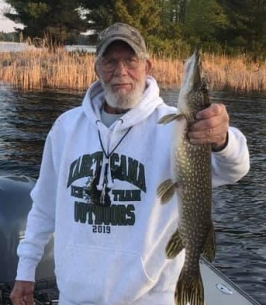 James Michael Jorgensen, 74 years old of Kenosha, WI went to be with his Lord and Savior Thursday, August 19, 2021.

James (“Jim”, “Jimbo” or “Jimmy”, depending on how you knew him) was born March 21, 1947, in Brooklyn, NY, the son of the late Walter and Sylvia (Hansen) Jorgensen. He spent his childhood in Brooklyn, NY and proudly served in the U.S. Navy during the Vietnam War. On February 29, 1980, he married Cindy Soronen in Las Vegas, NV and they settled in Cindy’s hometown of Kenosha, WI.

Jim was proud of many things, especially being an Iron Worker and building many bridges and buildings across the United States. He started his Iron Working career at Local 361 in Brooklyn, NY on September 21, 1964, book number 705982. Both his father and Uncle “Willy” were also proud members of Local 361. On March 1, 1979, Jim transferred in to Local 8 Milwaukee, WI where he also served as Union Organizer, Business Agent & Business Manager.

Jim was an avid hunter and fisherman and could be found spending much of his retirement at his & Cindy’s cabin in Bruce Crossing, MI. There, Jim was also a member of the Lions Club and VFW Post #9345.

In addition to his parents, Jim was preceded in death by his father-in-law, Roy Soronen and brother-in-law, James Moore.

A memorial service with military honors will be held at 11:00 a.m. on Saturday, August 28th, 2021, at Kenosha Bible Church, 5405 67th Street, Kenosha, WI. Masks mandatory. In lieu of flowers, those desiring may make contributions to VFW Post #9345, The Ontonagon Valley Sportsman’s Club or the Lions Club, all of Bruce Crossing, MI.