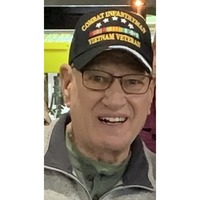 James Pallasch, 74, of Kenosha, Wisconsin, formerly of Sioux City, Iowa, passed away on Monday May 30, 2022 in his home.

James worked as a laborer at Klinger construction in Sioux City Iowa and Riley construction in Kenosha for many years, he then went to work for Grays Lake Naval Base where he retired. James was an avid hunter, fisher and golfer. He enjoyed cheering for the Badgers, Hawkeyes, Packers, Brewers and Bucks. He greatly enjoyed spending time with his family and friends.

James was proceeded in death by his Mother Ladonna, Father Sigmund and Step Grand-Daughter Kaylee.

A celebration of life will be held on Friday June 3, 2022 at Kenosha Funeral Services from 10:00AM-12:00PM, with military honors and memorial services to follow at 12:00PM