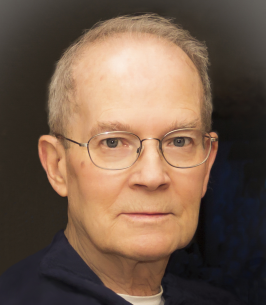 James was a Devout Catholic, having served as an Usher and Treasurer at St. Pius V Shrine in Lake Zurich, IL.
After he graduated from Gilman High School (Class of 1951), James studied at Wisconsin State College – Eau Claire.

James was a Veteran of the U.S. Navy, having served with honor from January 23, 1952 – December 20, 1954, attending Aviation and Electronics Schools and performing the duties of Radio Repairman. James was a proud member and Past Commander of the American Legion David Leet Post #552 of Somers, WI, and Trustee/Shipmate with the Navy Club Ship #40 of Kenosha, WI.

He worked at General Electric for 2-1/2 years, and American Motors Corporation, then later Chrysler Corporation from where he retired in 2003 after 45 years. He received many perfect attendance awards which instilled a strong Work-ethic in his children.

In addition to his beloved parents, James was proceeded in death by his wife of 38 years and beloved mother of his five children, Angeline D. (Wargin) Goshaw; and his brother, Loren Goshaw.

Additionally, James loved volunteering driving people to medical appointments and delivering food to the needy through the Meals-on-Wheels Program with his Wife, Ellen, who will continue the Service to the Community.
James also enjoyed attending family gatherings, camping, fishing, riding his Harley, church activities, physical fitness, and traveling.

He will forever be known for his kindness and gentlemanly treatment of everyone he touched. Facing generational challenges presented by his rambunctious children, James’ unconditional love made him a rock of inspiration. He will be missed and remembered with love.

A Mass of Christian Burial will be celebrated on Friday, June 10, 2022, at Our Lady of Mt. Carmel Catholic Church at 12:00p.m. A visitation will be held at Proko Funeral Home on Friday, June 10, 2022, from 5:00 p.m. until 7:00 p.m. concluding with Full Military Honors. Burial at Union Cemetery in Boyd, WI, will be held privately. In lieu of flowers, memorials to Saint Jude Children’s Research Hospital or Hospice Alliance would be appreciated by the family.