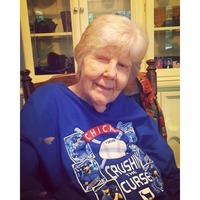 Helen Elizabeth Gryczkowski, age 93, passed away on September 18th, 2021 at home in Maryland with her daughter Carol and family.  She was born on June 24, 1928 along with her twin sister. She married Stanley Gryczkowski on October 28, 1950 who preceded her in death in January 23, 2011.

Helen worked many years as a registered nurse at St. Catherine’s Hospital, several nursing homes, summer camps, and the factory in the Kenosha area. Her family and strong faith were most important to her. Her life was a living example of the bible verse, Ephesians 4:32- “… be kind and compassionate to one another, forgiving one another, just as God also forgave you in Christ.”

She was an avid Cubs fan and was thrilled to be able to watch them break the 108-year curse and win the Worlds series in 2016. Her favorite color was lavender and she loved to watch for birds, especially her favorite bird a cardinal- -which she would call “angels from heaven”-and loved the one that visited her regularly at her home in Maryland.

She is survived by her twin sister Jeni Hudson, and her sister Mary Sams.

She was preceded in death by her beloved husband Stanley, her daughter Mary Patricia, her mother Veronica, her father Gus her brothers John, Craig, Father Edward, and Father Joe and two infant siblings.

Visitation will be at Our Lady of Mount Carmel Church 1919-54th street Kenosha Wisconsin. The viewing will be in the Church’s Italian Gardens on Thursday September 30, 2021 at 9:30am immediately followed by a funeral mass at 11:00 am.

Interment will be at Southern Wisconsin Veterans Memorial Cemetery in Union Grove on October 28, 2021 where she will once again be joined with her husband on their anniversary.