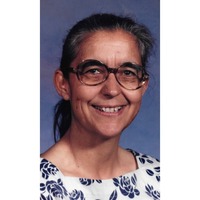 Heidi was born in Tulsa, Oklahoma in 1932, the youngest of three sisters.  She attended the University of Kansas, Lawrence, where she met the love of her life, Raymond Johnson.  They married in 1955 and had an adventurous life together, living and working in Dallas, Texas, rural Sweden, and even a year near Basel, Switzerland.

While in Texas she got an MA in Elementary Education at North Texas State.  She taught for many years, mostly in middle schools, but she always said her favorite years were when she lived in rural Sweden, taking care of her son, learning to bake bread, sew her own clothes, raise vegetables, pick berries, and make jam.  After she and her family moved to Kenosha in 1970, she taught English and Social Studies at Lance Junior High for many years.  She and her husband Raymond were actively involved in the Lakeside Players, both at Kemper Center and after the Players moved to the Rhode Opera House.

After the loss of her beloved husband, she became involved in various groups in Kenosha, among them the Lighthouse Lacers. She was an active member of St Mary’s Lutheran Church. Heidi had friends and family around the world, and made regular trips to Sweden, the Netherlands and Switzerland to visit them.

She will be remembered as an active and adventurous lady.  In 1980 she decided to buy some land in Colorado and build a log cabin by hand, and she did!  In 1997, never having been to a developing country before, she bought a plane ticket to Kenya to visit her son and daughter-in-law who were working there on a project.

Heidi is predeceased by her husband Raymond, and her sisters Marianne and Gretel. She is survived by a son, Sören, a daughter-in-law, Heleen Gierveld, and a grandson, Stefan (all living in the Netherlands); in addition, nephews, Phil Marchbanks and Howard Marchbanks, and nieces, Dru and Carol Marchbanks-Hoffman (all living in Oregon).

A memorial service to celebrate her life will be held at St Mary’s Lutheran Church on Monday 22 November at 1:30PM.  Instead of flowers, you could contribute to one of Heidi’s favorite Kenosha charities: The Shalom Center or Hospice Alliance.