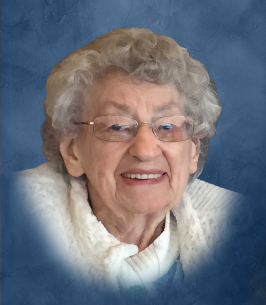 Hazelle E. Wilson, 99 years old of Pleasant Prairie, WI passed away Sunday, August 22, 2021, at her home, surrounded by her family.

She was born November 7, 1921, in Chicago, IL the daughter of the late George and Doris (Ramelow) Clark.

She grew up in Chicago and on July 22, 1944, she married Theodore S. Gaida; he preceded her in death in 1953. She later married John Wilson on November 17, 1973, and he preceded her in death February 4, 2021. During the Depression, Hazelle worked as a seamstress, and continued as the family tailor for many years, until her vision was compromised. She also worked for the Railroad in Chicago for 30 years, as a claims investigator, retiring in 1986. Hazelle was a proud member of the National Association of Railway Business Women. For many years, Hazelle volunteered her time and talent crafting and crocheting items for hospitals in Waukegan, IL where she made numerous friends. She also volunteered for several years with her late husband, John, at the Kenosha Public Museums.

Hazelle enjoyed reading, solving word search puzzles, and playing cards. She also loved hummingbirds and butterflies, an affinity that was evident throughout her home and garden. Above all else, she cherished the time she spent with family and friends.

In addition to her parents and husbands, Hazelle was preceded in death by her brother, Raymond (Jeanette) Clark and a special aunt, Hilda Lynge.