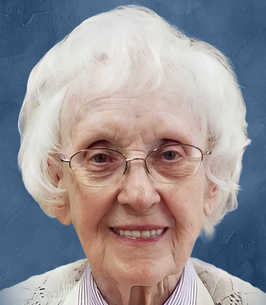 Hazel Tritt, a longtime resident of Kenosha, WI passed away peacefully at Robin Way Assisted Living on Saturday, October 30, 2021, at the age of 90.

She was born in Winneconne, WI the daughter of the late Leonard Korn and Flossie (Conger) Cyrtmus. She had two siblings who are also deceased, Beatrice Angel and Carl Korn both of Winneconne, WI.

Hazel married Raymond Tritt of Omro, WI in 1949. They moved to Kenosha, WI in 1960, where Raymond and several of his brothers worked for American Motor Corporation (Chrysler). Raymond preceded her in death in 2001. She was also preceded in death by her son, Michael Tritt in 2009.

Hazel enjoyed her work at Sears and later as a realtor. She was a member of Trinity Lutheran Church, and her hobbies included square dancing, sewing, and spending time with her family.

She is survived by her children, Peggy (Richard) Simpson of Colorado, Ronald (Tina) Tritt of Kenosha and Lori Rath (Mike) of Georgia. She is also survived by one brother-in-law, David (Roxanne) Tritt; six grandchildren, Matt, Stephanie, Stacey, Jonathan, Bryan and Adam; six great-grandchildren, with one more on the way.

The family would like to thank Robin Way and Hospice of St. Croix for their care and compassion during this difficult time.

Visitation will be held from 4:30 p.m. – 6:00 p.m. on Thursday, November 4, 2021, at Proko Funeral Home. Funeral services will commence at 6:00 p.m. Thursday. Entombment will be private in All Saints Mausoleum, Pleasant Prairie, WI.