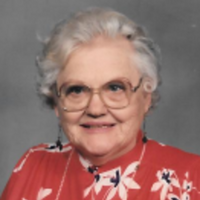 Died November 11, 2021, at the age of 98 (31 days from her 99th birthday) of natural causes in her sleep at home. She was born to Julius Krupinsky and Jennifa (Kacejko) Krupinsky on their farm in Kenosha Wisconsin in 1922. She was a member of St Therese of Lisieux Catholic Church in Kenosha.

She was preceded in death by three sisters, Alice Kordecki Bessie Krupinsky and Bernice Larejeno and two brothers, Walter and Leo Krupinski.

After graduating Kenosha High School,  she helped on the family farm and worked various jobs in the area until she enlisted in the Women’s Army Corps in 1944 and received an Honorable Discharge at the end of World War II. While in basic training background footage of her marching with her fellow trainees was filmed for the movie Keep Your Powder Dry. After discharge she returned home and worked various jobs. She trained at Kenosha Vocational School and passed the state exam to become a Licensed Practical Nurse. While working as a nurse in the area she returned to the same school now named Gateway Technical College and was part of the first graduating class for their Registered Nurse Program. After passing the State Board exam she took a position that she worked at until she retired at the Veterans Hospital in North Chicago then called the Downey VA Hospital.

She enjoyed hunting, fishing and camping and was an avid deer hunter while she was physically able. She was married twice and had two children from her first marriage, Michael (Terry) Kuchinski and Diane (Charles) Giovanelli (nee Kuchinski). After the death of her first husband, she married Morton E. Johnson with whom she had four children, one being still born, Stephen (Debbie) Johnson, Charles (Donna) Johnson and David G. Johnson. She was divorced and never remarried. She continued to work and purchased a home in Kenosha Wisconsin where she resided until her children were grown. She returned home to her family farm to care for her elderly parents (Julius Krupinski lived to 103).  She continued to work at the VA hospital where she was eventually promoted to the position of Head Nurse on the afternoon shift. She retired from the VA and was a charter member of the Kenosha Chapter of the National Association of Retired Federal Employees (NARFE) association. She remained active and extremely independent during her retirement until her eyesight faded due to macular degeneration. Carrying on her family’s tradition she sold vegetables and mushrooms at the  Kenosha Farmers market under her Polish name Jadwega’s Garden. Even after her eyesight faded, she remained active and was a member of the Wisconsin chapter of the Blinded Veterans Association (BVA). In 2017 Gateway Technical College honored her with their Annual Veterans Excellence Award. She enjoyed the companionship of friends, family and her fellow veterans especially those that had also had their eyesight afflicted. She was active in the Veterans Impaired Vision Activities group (VIVA) and made multiple annual trips to Camp American Legion in Lake Tomahawk Wisconsin where she and her fellow vision impaired veterans enjoyed camping, boating and her passion, fishing. She continued fishing up to the last month of her life.

She was preceded in death by her parents and all of her brothers and sisters, her former husband, and her son Charles. She is survived by her other sons Michael L Kuchinski (Portage), Stephen E. Johnson (Racine), David G Johnson (Kenosha) and her daughter Diane Giovanelli (Kenosha). She was proud to tell people that she was unable to count high enough to know how many loving nieces, nephews, grandchildren and great grandchildren and even a few great, great grandchildren that she had.

She was always thankful and proud of the fine care that she received through the Veteran’s Administration at the Union Grove VA clinic and the Zablocki Medical Center in Milwaukee. Per her request she will be cremated and her remains interred at the Union Grove Veterans Cemetery. Any ceremony will be at a later date at the cemetery and will be private.