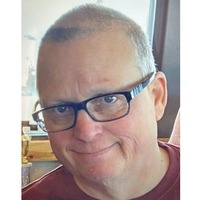 Gregory Watkins, 61, of Kenosha passed away on Wednesday November 2, 2022, at Froedtert-Milwaukee surrounded by his loving family.

Gregory was born on September 28, 1961, in Kenosha, the son of the late Maxwell & Kathleen (Dielmann) Watkins. He was educated in the schools of Kenosha, graduating from Tremper H.S. Gregory married Virginia Marchese on May 15, 2000, in Kenosha. Gregory was employed for many years at McClaine Food Service. His hobbies included playing guitar, cheering for the Packers & Bears, but most of all spending time with his family & friends.

Survivors include his wife, Virginia Watkins of Kenosha; step-children, Stephanie (Nick) Torcivia, Joshua Watkins both of Kenosha; brother, Scott (Megan) Watkins of Burlington; and 5 grandchildren.  Gregory was preceded in death by his parents, Maxwell and Kathleen also included is his sister, Sandra.