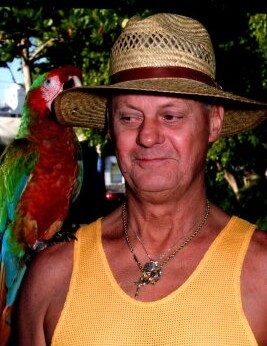 George C. Campbell, age 73, of Twin Lakes, WI, died on Monday, April 4, 2022, at Lakeland Medical Center.  Son of the late Clifford and Ruth (Brisbane) Campbell, George was born on June 9, 1948, in Cincinnati, OH, one of seventeen children. George proudly served in the United States Army during the Vietnam War. He was awarded two purple hearts before his honorable discharge from the service, and was a member of the Kansasville, WI VFW. George was named Mr. Cincinnati in a body building competition in his younger years. He had many careers throughout his life including construction, driving truck, and bartending. George was a people-person who created a welcoming, friendly environment for those around him. He had a big heart and was the life of the party, making friends everywhere he went.

George is survived by his daughter, Christen (Rick) Campbell Broadway; his significant other, Barbara Phillips and her children and grandchildren, Wendy (Rick) Moore and Wayne (Dora) Brennan; Brittany, Brandy, and Naille; as well as the entire Campbell Clan including numerous siblings, cousins, nieces, and nephews. George was preceded in death by his wife, Joyce (Cox) Campbell; and his parents, Clifford and Ruth.

In keeping with George’s wishes, no funeral service will be held. Online condolences can be made at haaselockwoodfhs.com.