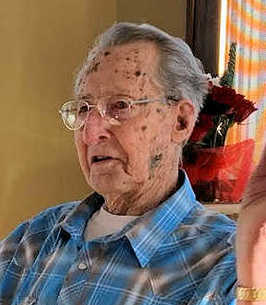 Born on January 2, 1921, in Burlington, he was the son of the late Paul and Annie (Reidla) Meurer. He attended local schools and graduated from Genoa City High School.

In October of 1946, he married Mary Skinner in Burlington. They were married for 53 lovely years. She preceded him in death on June 8, 1999. Every Saturday Franz drove himself “out to the county” to visit Mary. Then he would stop at the home of Larry and Linda Smith to visit with their family.

He was a member of Trinity Lutheran Church and enjoyed walking with his walking group. At his walking group, he was introduced to Doris Magwitz. Franz asked her to coffee, and she said no multiple times. Although, the fourth time he asked her, she said yes! Franz and Doris had the sweetest relationship, and they were an example of life worth living.

He is survived by many nieces, nephews, grand and great grand nieces and nephews, and his other friends Bob Anderson and Johnny Cable.

He was preceded in death by his parents, Paul and Annie (Reidla) Meurer; his wife, Mary; his sister, Hildegard Carithers; and his dear friend, Doris (Kirchner) Magwitz.

Visitation will take place on Saturday, October 9th, at Proko Funeral Home, from 12:00 p.m. to 2:00 pm with service to follow. Interment will take place privately at Mount Prairie Cemetery.