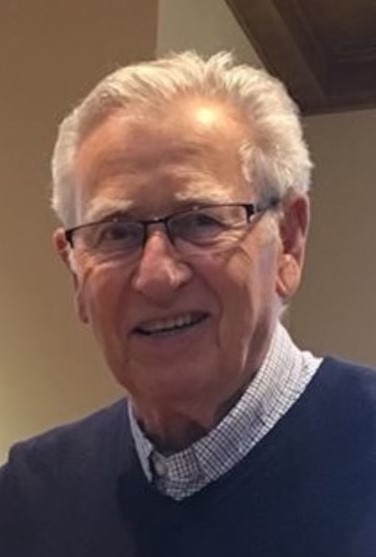 Frank William Aiello, age 88, a resident of Kenosha passed away on Monday September 20, 2021 at his home surrounded by his loving family. Born on November 5, 1932 in Kenosha he was the son of the late Louis and Chancey (Fumo) Aiello. He was educated in the schools of Kenosha and played key roles on several winning football and basketball teams for Bradford High School.

Frank served in the military form 1952-1956 and achieved Navy 3rd Class status. He spent two years at Great Lakes Naval Base and was deployed for two years on the USS Philippine Sea (CV-47) aircraft carrier.

On June 6, 1959 he married Delores (Lori) Christman in Kenosha and they were happily married for more than 60 years.

Frank was employed for 42 years by Allstate Insurance Company and ran his own agency for the company in Kenosha for more than 25 years.  Frank touched the lives of thousands of local customers during his tenure with Allstate, and many of those customers became friends.  Highly respected in the community, he was a member of the Roma Lodge in Racine and a longtime active member of St. Mary’s Catholic Church.  He enjoyed attending his children’s and grandchildren’s sporting events, reading, and his trips to the casinos.  In addition, Frank and Lori were avid travelers and spent time during many winters enjoying sunshine in the Sarasota, Florida area.  While back in Kenosha, Frank could often be seen out and about enjoying his time at local restaurants with either friends or members of his family.  Both Frank and Lori always lived by the motto “Family First” and they have taken special care to make sure that approach is carried forward in their memory.

He is preceded in death by his parents Louis and Chancey Aiello, his wife Delores Aiello, his sister Olivia Ruffolo, and his sister and brother in law Jeanette and Richard Krause.

The immediate family wishes to thank all of those who cared for Frank during his last days including Shelley Flasch; the wonderful doctors and nurses at Froedert South Hospital, particularly Dr. Anna Silenzi and Kristen Kmetz; and many other friends and family members.

A Mass of Christian Burial will be held on Saturday September 25, 2021, at 11:00am at St. Mary’s Catholic Church in Kenosha. Visitation with the family will also be on Saturday at the Church from 9:30am until the time of Mass. Burial will take place at Southern WI Veterans Memorial Cemetery at a later date.