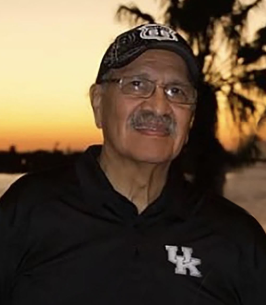 He was born August 19, 1944, in St. Paul, MN, the son of the late Ascension G. and Angelita (Garcia) Vasquez. Frank proudly served in the U.S. Army as a clerk typist in Germany; he was honorably discharged in 1967. On November 18, 1967, he married Susan Sandberg in Kenosha, WI and they remained area residents.

Frank was a parishioner of St. Mark the Evangelist Catholic Church, Kenosha, and was a 4th Degree member of the Knights of Columbus Council #973, Kenosha. He loved all sports, especially cheering on any Wisconsin teams. Frank was an avid bowler and played softball in local Rotary Tournaments; he was also a championship pool player, playing many games at the former Playboy Club, Lake Geneva, WI. Frank was employed by Outboard Marine Corporation for 31 years.

In addition to his parents, Frank was preceded in death by a granddaughter, Brianna Vasquez; siblings, Joe Vasquez, Delores Antrim, and Mary Lou Medrano, and brother-in-law, Jesse Medrano.