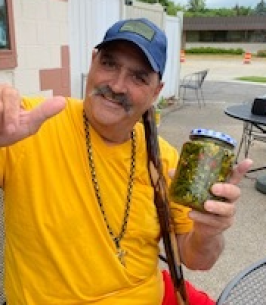 Frank attended local schools and graduated from Mary D. Bradford High School. He continued his education and became a certified butcher and welder. For 16 years Frank worked for Johnson Motors as a furnace repair technician.

He loved spending time in Chippewa County, or as he would call it “God’s Country”. He enjoyed training his dogs for pheasant hunting trips and fishing with his brothers. Frank was a talented guitar player and singer, and was a member of the Grace Lutheran Church choir for many years. Frank has passed on the now four generation “Lenfestey Pepper” recipe to his children and grandchildren. Above all else, Frank cherished his family.

In addition to his parents Thomas and Esther (Fortino) Lenfestey, Frank was preceded in death by his son, Frank Lenfestey, Jr. and brother, Thomas V. Lenfestey, Jr.

Visitation will be held on Monday, August 16th, at Proko Funeral Home from 11:00 a.m. until the time of service at 12:00 noon. Interment will follow at St. George Cemetery.