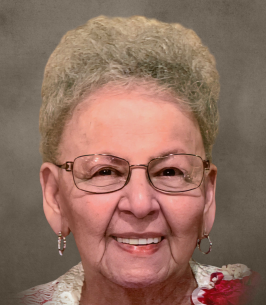 Born on October 10, 1929, in Austin, TX, she was the daughter of the late Santos and Pasqualita (Morales) Garza. She attended schools in Texas. She moved to Kenosha, WI, in 1950.

She was employed at Warwick electronics in Zion, IL for many years, and later at LeBlanc instruments where she was in quality control until her retirement.

Frances was a member of St. James Catholic Church, The Catholic Women’s Club, and a member of the Kenosha Senior Center. She enjoyed taking family photographs, socializing with her close friends, dancing, and traveling. She also loved going to the ballpark every chance she could to see the Milwaukee Brewers, but above all else she loved spending time with her family.

Frances was also preceded in death by her two sisters, Magdalena Garza, and Narcisa Trujillo; and grandson, Steven E. Villalobos.

Prayers will be held at Proko Funeral Home on Saturday, January 29, 2022, at 9:30 a.m. A Mass of Christian Burial will be celebrated on Saturday, at St. James Catholic Church at 10:00 a.m. To livestream the Mass, please copy and paste https://www.facebook.com/ProkoFuneralHome/live_videos/ into your browser at that time. Interment will follow at St. James Cemetery. A visitation will be held on Friday, January 28, 2022, at Proko Funeral Home from 4:00 p.m. until 7:00 p.m. A Rosary Vigil will start at 6:00 p.m. followed by family eulogies. In lieu of flowers, memorial contributions may be donated to the American Diabetes Association.