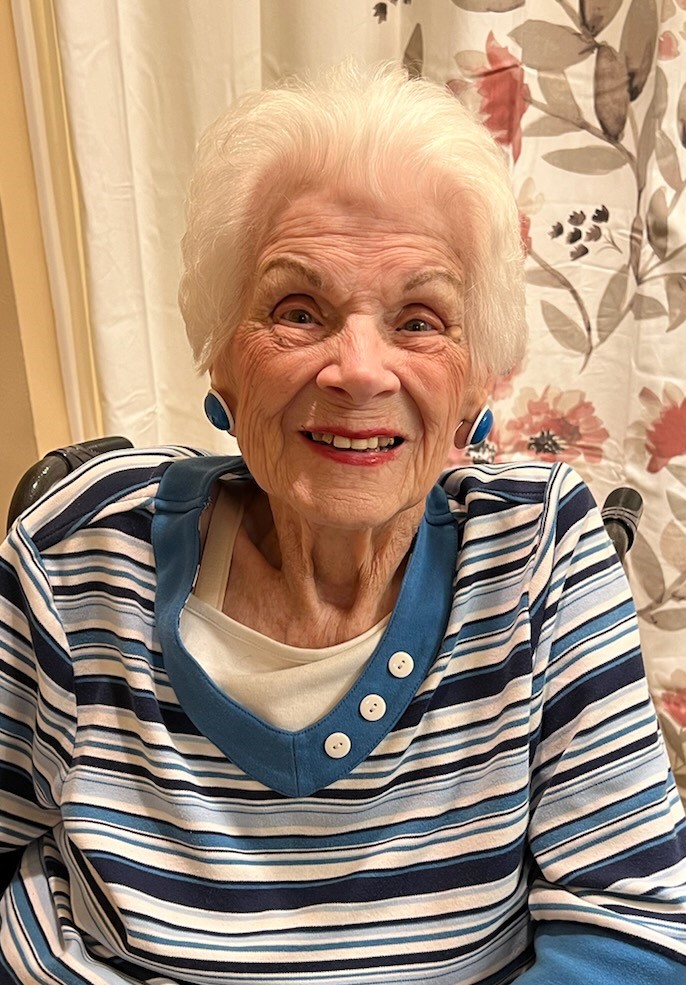 Florence C. “Flo” Supay, age 99, of Lake Geneva, formerly of Walworth passed away peacefully on Wednesday, April 13th, 2022 at Village Glen in Lake Geneva, Wisconsin.  Flo was born on July 7th, 1922 in Chicago, IL to Clarence and Alice Zaabel. Her childhood years were spent in Berwyn, IL, where she attended St. Mary of Celle grade school and Morton High School in Cicero. Florence was married to Benedict Ahr on August 25th, 1942 and the couple had two children, Kathleen and David.

The marriage later dissolved and on October 24th, 1971 Flo married Edward “Eddie” Supay, and the couple had 34 years together. Flo and Eddie lived in Darien, Westmont, LaGrange Park and North Riverside, where Eddie was active in the VFW honor guard and Flo proudly supported him as he carried the flag in many parades. A favorite activity was a Friday night fish fry at the VFW.  They enjoyed traveling together with their friends, especially their biannual trips to Las Vegas. One time Flo, two of her sisters, and Eddie took a trip to California.  They bought t-shirts that said “Eddie and the Cruisers.” While on that trip, a waitress asked if they were a ‘rock’ band. Many friends even joined them when they went to Hawaii on their honeymoon. They really knew how to have fun.  Later in life they moved to Batavia, where they lived until Eddie died in 2006.

Flo worked as a bookkeeper and as an Executive Secretary in the advertising industry until her retirement in 1987.

After retiring, Flo loved spending time with her friends, children and grandchildren. She was a creative party planner and loved celebrating events. She enjoyed playing dominoes and bowled until she was 88 years old.  Flo lived in Villa Park, Illinois for a number of years until she moved to a retirement home, Golden Years of Walworth, in Walworth, Wisconsin.

A Mass of Christian Burial for Flo will be held at 11:00 A.M. on Wednesday, April 20th, 2022 at Mater Christi Catholic Parish (2401 S. 10th Avenue, North Riverside, IL) with burial to follow at Queen of Heaven Catholic Cemetery (1400 S. Wolf Road, Hillside, IL). A visitation will be held at the church on Wednesday from 10:00 A.M. until the time of Mass. In lieu of flowers, the family requests memorials be sent to Aurora at Home Hospice, 116 N. Dodge Street, Suite 8, Burlington, Wisconsin, 53105.

The family would like to thank the wonderful staff and care givers at Golden Years of Walworth, where Flo lived for 7 years; and, to the thoughtful and caring administrators and staff of Village Glen Memory Care in Lake Geneva.  Also, the family’s  gratitude goes to the nurses, aides, chaplains and everyone at Aurora at Home Hospice Care.