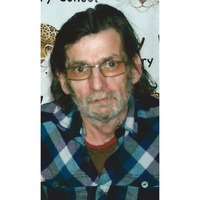 Earl Jay McDermid was born on June 26, 1952, in Oconto Falls, Wisconsin to the late Alton J. and Arlene M. (nee Schultz) McDermid.  Earl served in the US. Army from May 17th,1971 to August 16th, 1976. He served in Vicenza, Italy in the motor pool. In June 1973 he became sergeant. He received the National Defense Service Medal, Good Conduct Medal, Expert M-16 Medal, and the Mechanics Badge with Bar. On May 11, 2012, Earl was united in marriage with Mary Margaret McDermid in Kenosha. Earl followed in his late mother’s footsteps and worked as a machinist at Snap-On Tools from 1976 until 2004. He then worked as a meat packer at Fair Oaks Farms in 2004. In 2005 he worked as a packer at Unified Solutions. He then worked as a machinist at Monarch Plastics in 2006. He was a member, “Squirrel,” of County Line Vans vanning club since the late 70’s. Earl could always find joy in the simple things of life. He enjoyed his life filled by bowling for a league, camping with his van club, reading the newspaper or Reader’s Digest, and traveling to Colorado to see the Rocky Mountains whenever he got the chance.

Visitation for Earl will be at Bruch Funeral Home in Kenosha on Monday, January 10, 2022 from 11:00 am to 1:00 pm. The casket will be closed at 12:30 pm with a celebration of life ceremony beginning at 1:00 pm, with full military honors to follow.