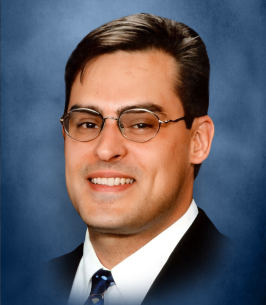 Dr. Anthony “Tony” R. West, 52, of Kenosha, WI, passed away on Friday, March 25, 2022, at Ascension All Saints in Racine, WI. He was surrounded by his loving family and received into a life of eternal peace. It was repeated so often that Tony was the kindest man. Even during his last months as he battled his illness, his medical caregivers always noted how sweet he was despite all he was going through.

Tony was born on January 28, 1970, in Minneapolis, MN to Ronald and Gloria (Puckropp) West.

In 1998, he married AnnMarie Sundareson at St. Paul’s Cathedral in Detroit, MI. Tony was a proud father, blessed with two sons: Zachary Alistair (21) and Rowan Anthony (15). Tony and AnnMarie were married for 19 years.

Tony was employed as a scientist in the Department of Neuroscience at Rosalind Franklin University of Medicine and Science until his retirement as a tenured Full Professor in March 2020. He mentored over 16 graduate students and postdoctoral fellows and participated in the training of at least 60 undergraduate and rotational students. He was a beloved professor. He sat on many committees and gave many lectures and presentations around the world. He published numerous novel research papers, authored book chapters, and edited scientific texts. He collaborated with other scientists in the states and abroad. He received over 4.5 million dollars in research funding from the NIH and private foundations. He received many awards and honors during his tenure. He was adored and respected by his colleagues.

Tony enjoyed the outdoors. He loved fishing and boating. He found maintaining saltwater and freshwater aquariums relaxing. He truly appreciated music and inspired his son Zachary. He was a diehard fan of the Minnesota Vikings.

Tony was preceded in death by his father; Aunty Geraldine Hedstrom; his dear grandmothers, Anne Puckropp and Bea West-Brenna; and his most beloved cousin, Scott Hedstrom (1/11/67-3/25/2002).

A memorial visitation will be held on Sunday, April 3, 2022, at Proko Funeral Home from 2:00 p.m. until the time of service at 4:00 p.m. To livestream the service please click this link, ttps://facebook.com/ProkoFuneralHome/live_videos/ at that time. In lieu of flowers, memorials to Mental Health America (mentalhanational.org) would be appreciated by the family.