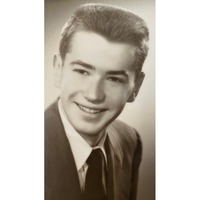 Donald L. Benning, 87, passed away peacefully at the Aurora Hospital surrounded by his family on Friday April 1, 2022, after a long struggle with dementia.

Don was born in Kenosha on May 4, 1934 to Erwin and Vera (Griffin) Benning. He was educated in the Kenosha schools and graduated in 1952 from Mary D. Bradford HS. After High School he worked at his father’s car dealership as a mechanic. In 1954 he joined the Army. He was stationed in Tokyo Japan where he served as an Honor Guard at General MacArthur’s Command Headquarters.

While in Tokyo he met his soul mate, Joan Walker. They were married on June 15, 1957 and they lived their entire married life in his beloved Kenosha.

Don owned and operated Benning Motors, Inc for 23 years, retiring in 2003. However, he was a dedicated “car guy” and remained in the business long after his retirement. He loved attending car auctions, flea markets and especially the Barrett-Jackson car auctions in Scottsdale, AZ. His life’s true passion was cars, but also enjoyed traveling, going to concerts and playing golf.

He was blessed with two daughters, Janice (Brian) Rouse and Donna (Edward) Kotlan.

He is survived by his wife, Joan of 64 years his daughter Janice, granddaughter Jennah (Rouse) Metcalfe, grandson Alex Jaden Kotlan and many nieces and nephews.

He was preceded in death by his daughter, Donna, his sisters Patricia Mathews and Bernice Kuehl, his brother Bob Benning and his parents.

Don will be greatly missed and will always be remembered as a kind, generous man who loved his family and especially loved to spend time with his grandchildren.

Don had a wonderful life and lived it by his favorite saying “I did it my way”.

The family wishes to thank the Aurora Hospital staff and Aurora Hospice for their kind, generous and compassionate care in his final days.

Inurnment at Southern Wisconsin Veterans Memorial Cemetery will be private. In lieu of flowers, memorials to Aurora Hospice and the Alzheimer’s Foundation would be appreciated by the family.