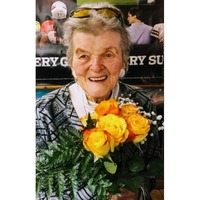 Diana M. Kramsvogel, 95, of Kenosha, passed away peacefully, surrounded by her loving family, Monday, January 24, 2022 at her residence.

She was born on September 1, 1926 to the late Laurids and Anna (Ostergaard) Jorgensen in Kenosha.  She was educated in the schools of Kenosha.

Diana worked as a caster for Regal China from 1972 to 1979.  She also ran antique malls in the downtown area.

She is preceded in death by her daughter Kay (Dennis) Plowman, her son Robert J. Kramsvogel and a sister Mariane Dodge.

Private Services for Diana will be held.  A Celebration of Life will be held in the summer. In lieu of flowers memorials would be appreciated to St. Jude’s or to the Danish Sisterhood Rebuilding Fund.

The family would like to thank CNA Vanessa and the staff at Kindred Hospice for their loving and compassionate care given to Diana.