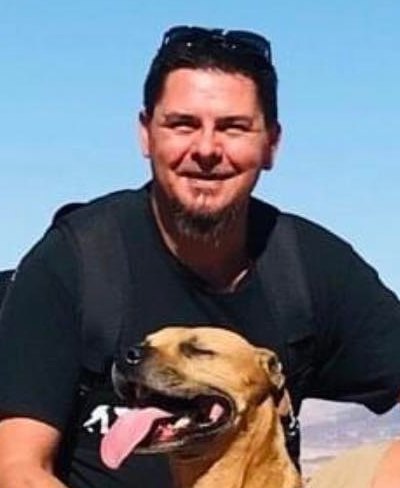 Dayne was born on August 16th, 1970 in the United Kingdom to William Robert Wood and Winifred Theresa Wood.  He was the proudest father of Jake Rizler Wood (UK) and Jamie Dean Dawson (DE).  He was a devoted dog dad to Jax, who was always by his side.  Dayne led an amazing life as a wanderer and citizen of the world, spending his last 20 years in the United States. Dayne loved the outdoors, people, music, video games, formula one, and riding motorcycles.  He was an engaging storyteller and made friends wherever he went.

Dayne is survived by his family in the United Kingdom; his sons Jake and Jamie, his parents Bill and Terrie, his sister Dawn and brother-in-law Darren, and extended family Natasha, Sophie, and Bambam. He was preceded in death by his sister Lorraine.

At this time no formal services have been planned.  Dayne’s family in the UK will be holding private services and will notify loved ones of the details.  A celebration of life will be planned for later this summer in the US and be shared publicly once details are finalized.