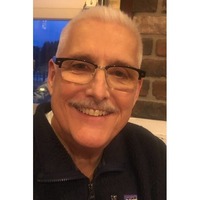 He was born on March 5, 1955 in Dortmund, Germany and was adopted at the age of two by the late Vincent and Lucille Sebetic and came to the US in 1957.  He was educated in the schools of Kenosha and graduated from Mary D. Bradford High School, where he was the captain of the swim team and sang in the Bradford Singers.  He received an associate degree in Fluid Power from Gateway, attended Milwaukee School of Engineering and also graduated from Marion University with a Business Degree.

On August 19, 1978 he married Linda Richter at Grace Lutheran Church.  They celebrated 43 years of marriage.

Dave worked at AMC/Chrysler for 21 years, retiring in 2010.  He worked in quality control on the block line with 4.0 engines.

Dave enjoyed traveling to Cancun, Mexico with the family.  As a young boy Dave spent summers in Door County working in cherry orchards and on farms.  He enjoyed bowling, golfing, and attending car shows.  He was known as “Mr. Fix It”. He was an avid Green Bay Packers fan.  Most of all, he loved spending time with family and attending his grandchildren’s activities.

Dave is survived by his loving wife Linda, his two sons Daniel (Jennifer) Sebetic and Jonathan (Anna) Sebetic, his grandchildren Kinsley, Lakyn and Hunter, his twin brother Donald and his mother-in-law Margery Richter.

He is preceded in death by his parents, his beloved aunt Myrtle Foster and his father-in-law Charles Richter.

Private Family Services will be held.  A Celebration of Life will be held later this summer.

The family would like to thank the staff at Brookside Care Center for their loving and compassionate care given to Dave.

Memorials would be appreciated to St. Jude’s.