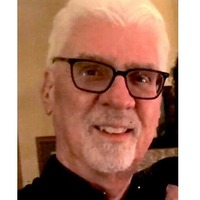 Dan was born in Kenosha, WI January 19th, 1954, to Rocky and Betty (Dodge) Rock. He attended local schools and graduated from Tremper High School in 1972 and from UW-Parkside with a bachelor’s in philosophy. Dan married his high school sweetheart, Carol Allie,  on October 16th, 1976, and has been married for 45 years. He was employed at American Motors, and later was self-employed, as a home inspector for the past 27 years before retiring. His passions in life were cooking with his wife on Saturday night/date nights. His love of golf culminated with their trip to Scotland, and his love of opera led them to Chicago and New York. Gardening was another passion of Dan’s. He also enjoyed volunteering his time at Women’s and Children’s Horizons, Meals on Wheels and Salvation Army as a bell ringer.

Dan is survived by his loving wife, Carol. He is also survived by his brothers, Michael (Susan), Matthew John, and his sister Patricia, along with his brother-in-law and sister-in-law, Larry and Linda Rasch and his many nieces and nephews. Also left behind to cherish his memories are many close friends, especially his Tuesday golf buddies. He was preceded in death, by his parents, and his in-laws.

In lieu of flowers, Dan requested that you cook a special dinner with a loved one, play a round of golf, or donate to the Hospice Alliance.

A memorial gathering will be held at Kenosha Funeral Services on Friday June 17, 2022, from 10:00AM-11:30AM with memorial services to follow immediately at 11:30AM. Private Burial at All Saints Cemetery.