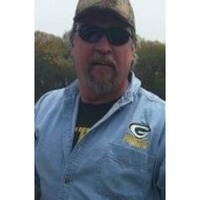 He was born on November 21, 1955 to the late Frank R. and Catherine (Collins) Ruffolo in Colorado Springs, CO.  He was educated in Kenosha and graduated from Mary D. Bradford High School.

On December 28, 1991 he married Mimi (Rice) Ruffolo in Kenosha, where they remained joyfully married for 30 years.

He was a happily retired CNC machinist and was also a member of the Loyal Order of the Moose Lodge #286.

Dan was the best friend, father, husband and grandfather anyone would want to have.  He loved his family more than anything.  He was an avid Packers fan, Brewers fan, and NASCAR fan.  He loved hanging out on Fridays in his man cave with his friends and family, drinking his Rolling Rock, having a fire, and listening to his favorite music with his dogs while he created magic on the grill, everything he cooked, was always top notch.

He was also an avid fisherman.  He loved to take his nephews Phoenix, Chase and Kai, and grandchildren Deegan, and Ryder fishing at the cottage.

Dan is survived by his loving wife of 30 years Mimi, his children Samantha (Chris) Ruffolo-Dorr, Dalton (Dominique Samuels) Ruffolo and Danny (Nicole Erickson) Ruffolo, his grandchildren Deegan Daniel Dorr, Ryder Steven Dorr and Elijah C. Samuels-Spencer, his brother Frank (Jeanne) Ruffolo his sister Alisa (Steven) Taleronik, his best friend Matt Pryby who he loved hanging out at the cottage and his dogs Redbay and Zoey who he adored.  He is also survived by many nieces and nephews.

A Memorial Visitation for Dan will be held on Saturday, May 14th from 10:00 a.m. until 1:00 p.m. at the Bruch Funeral Home.  Memorials would be appreciated to the family.