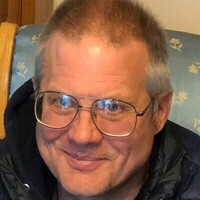 Curt Mueller, 56, of Kenosha passed away on Saturday January 8, 2022 at his home of natural causes.

Curt was born on May 15, 1965 in Kenosha the son of Judy (Lamich) Mawacke.  He was educated in the schools of Kenosha, graduating from Tremper H.S. He also took courses at UW Parkside, Trinity Lutheran College and Gateway College. His hobbies included running, fishing, computers, and spending time with his dog, Tori. He also enjoyed collecting fossils. He donated many of them to the Kenosha Public Museum, and one of them is still on display.  Curt was an avid car racing fan. One of his favorite moments was driving his sister Tracy’s Camaro around the race track at Road America.