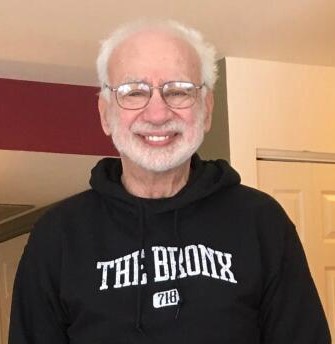 Carl Martin Lindner, age 80, passed away on August 7th, 2021. He was born on August 31st, 1940, in the Bronx to the late Max and Ruth (Adler) Lindner. He went to City College of New York City where he got his bachelor’s and master’s degrees and met his wife, Sandra.

He was accepted to UW-Madison’s English PhD program in the mid-1960s, and he and Sandra moved to Madison and had their first child there, Jennifer. In 1970 he earned his PhD, and shortly afterward was hired by the University of Wisconsin-Parkside to teach English and Poetry. They moved to Racine, where their second child was born, Peter. Not long after he began teaching, the administration of Parkside tried to fire almost all of their newly hired young professors in order to hire more prestigious staff. Some of the young professors banded together to resist this treatment, including Carl, who got the word to the media, and they succeeded. The administration backed down and almost all of the professors taught at Parkside until their retirement, earning many teaching awards along the way. Carl was greatly loved by his students throughout his career, for both his poetry and literature classes, and also earned many teaching awards. He was given a poetry award from the state of Wisconsin, bestowed by then Governor Drefuss.

Basketball was a huge influence in his life. He grew up playing it in Saint James Park in the Bronx, with his brother and cousins, and played very well most of his life. He taught his children how to shoot at the garage hoop in their backyard. His first full published book of poetry was called “Shooting Baskets in a Dark Gymnasium.”

He was an avid gardener, in love with the farmland of Wisconsin since first discovering it. He converted the family’s backyard into a garden, growing squash, tomatoes, strawberries, and sunflowers among many others, and grew a plethora of cactuses in the arid, bright window of his office at Parkside. After retirement he became active in the environmental movement, joining the Sierra Club and a coalition of activists who fought to shut down WE Energies’ coal plant in Oak Creek, which is shutting down earlier than they’d originally intended.

He loved Native American culture and art, and loved the books of Joseph Campbell, Carl Jung, and Rollo May. He took annual trips to the Rocky Mountains, sometimes visiting Skelly and Judy Warren’s theater camp, and once with his son Peter.

He is survived by his son Peter Lindner, daughter Jennifer Lindner, grandson Jonas Lindner, and cousins Ron Robins, Barbara Holland, Barbara Shea, Marty Hyman, Karen Buckley and Janice Wolpo, and an aunt, Myrna Adler. He was preceded in death by his parents, ex-wife Sandra, and younger brother Bruce. He loved life and was true to himself throughout it, a man of great integrity, warmth, humor, compassion, friendship, ferocity, and love. He was greatly loved and is greatly missed.