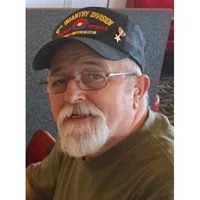 Bruce S. Crane of Kenosha, WI died peacefully on November 11th at home surrounded with love by his family.

Bruce was born on March 22nd, 1948 to Cora and Grant Crane.  He served in the United States Army and was a part of the 9th Infantry Division.   He was awarded the Bronze Star for Valor on his combat tour in the Viet Nam war.  He later also Served in the Army National Guard as 63D in the 1st Battalion 126th Field Artillery.

Bruce had a deep love for our Lord and Savior Jesus Christ and was a deacon at Kenosha Christian Fellowship Church.  He loved spending time with his family and friends especially sitting around the table laughing and playing jokers and marbles.  He was an avid outdoorsman.  Spending time in the woods chasing whitetail deer was his passion.  He loved to camp, hunt, fish and go tubing at the Dell’s Christian Campground where he served on the board of directors.

He retired from Chrysler after 30 years at the Kenosha plant and later the plant in Belvidere, IL.  He was a highly skilled mechanic that could fix anything, from his grandkid’s toy to a M-109A6  Palatin.  He lived to serve others and would often spend his free time helping a friend, family member or stranger in need of a hand.

He was preceded in death by his parents and Brothers Edwin and Sonny Crane.

Services will be held Saturday November 27th at the Bruch Funeral Home.  Visitation begins at 11 am until the service which starts at 1pm, with military honors to follow.