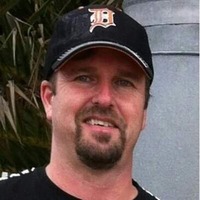 Brian received a degree in heating and cooling from Lincoln Technical Institute in Grand Prairie, TX in 1992 before returning back to his home State of Michigan with his family. In July of 1995, he began his career at General Electric as a Factory Service Technician. He was known for his exceptional work ethic, problem solving skills, and ability to connect with his customers. This led him to having the opportunity to travel to different zones across the country where he made many life long friends.  No matter where he went, Brian took great pleasure in getting to know other people.

For the opportunity of more work, Brian made the difficult decision to transfer from Michigan to Illinois in 2010 and in 2018 he purchased his dream home in Winthrop Harbor. At the beginning of 2022, he started a new chapter in his life, becoming the proud owner of his company, Here 4 U Appliance Repair.

Brian was completely devoted to his family, as a husband and father. He had a great love for animals and over time his family included his three dogs; Basil, Lily, and Gracie. He shared a love of cars with his son and met his second family through Rally North America, where he would travel around the country to support various charities.

Brian will be truly missed by his wife Katherine, his son Allen, his mom Elizabeth, his dogs Lily & Gracie, and a large community of friends across the world.

The family will hold a Celebration of Life on Saturday, March 26th, 2022 at Bruch Funeral Home in Kenosha, Wisconsin from 11:00-1:00 pm. Brian wasn’t a formal man so casual attire is encouraged to honor his memory.