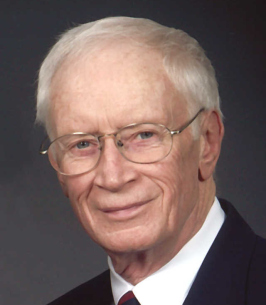 He was born November 17, 1933, in Sullivan, IN, the son of the late Lex H. and Carrie “Pearl” (Usrey) Sherwood. He grew up in Knoxville, IL and graduated from Bradley University, Peoria, IL with a bachelor’s degree in Marketing and a minor in Retailing. On June 26, 1955, he married Joan Carlson, and they later divorced. He was commissioned as a 2nd Lieutenant in the U.S. Air Force where he went through USAF flight school. Ben spent three years on active duty, including one year in the Arctic, followed by several years in the reserves before being honorably discharged in 1972 at the rank of Captain.

After serving in the U.S. Air Force, Ben joined Outboard Marine Corporation as a District Sales Manager selling outboard motors to dealers, serving two different midwestern territories. He later became involved in the creation of a new Division of Outboard Marine Corporation called OMC Parts & Accessories (later named OMC Genuine Parts), where he served for 15 years as Director of Sales, Marketing, and New Product Development. He was promoted to the position of Product Group Manager of Johnson Outboards and later of Evinrude, until his retirement.

After his retirement from OMC, Ben purchased and operated a Chevrolet dealership in central Illinois where he received a “Top Dealer” award his first year in business. He later sold that dealership and founded Sherwood Marine Marketing, which provided sales and marketing consulting services to the golf, automotive aftermarket, and marine industries. Ben wrote a monthly column for marine industry trade publications for many years. In 1998, he received a “Journalism Award” from the Marine Retailers Association of America.

On June 21, 1997, he married Linda (Dissmore) Novak and they settled in Pleasant Prairie, WI, where they are devout members of Kenosha Bible Church. Ben served the church in various capacities including 21 years as a Trustee, then Director of Facilities, retiring in 2019.

In addition to his parents, Ben was preceded in death by his siblings, Joyce Liston, Norma Bedwell, Warren Sherwood, Claire Ellen Spencer, and Jim Sherwood; and a grandson, Sawyer Sherwood.

Visitation will be held from 10:00 a.m. – 11:30 a.m. on Wednesday, November 3, 2021, at Kenosha Bible Church, 5405 67th Street, Kenosha, WI. Funeral services will commence at 11:30 a.m. and interment with military honors will be held at 2:00 p.m. in Sunset Ridge Memorial Park, Kenosha, WI. In lieu of flowers, those desiring may make contributions to Kenosha Bible Church, in his memory.