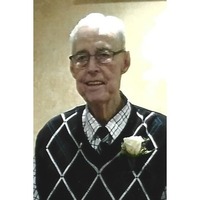 Arlin “Andy” R. Anderson, 86, of Kenosha, passed away peacefully, with his loving family by his side, Sunday, April 24, 2022 at his residence.

He was born on October 23, 1935 in Whitehall, WI to the late Arthur and Rose (Instenses) Anderson.  Andy attended schools and left school to join the US Air Force.  He served from January 1954 until he was honorable discharged in July of 1960.  He served during the Korean War and was proud of serving his country. He received the Air Force Commendation Medal.

In March of 1959 he married Josephine Dubroc and they later divorced and she preceded him in death.  On June 15, 1968 he married Carol Gerber at Bethany Lutheran Church in Bruce Crossing, MI.

In 1960 he went to work for American Motors.  He worked part-time for Town and Country Mobil, Grove Gear in Union Grove.  He went to school to receive his aircraft and engine license and in 1969 he went to work for Kenosha Aero Aviation as a mechanic until 1992 where he retired from.

Andy was a member of St. Mary’s Lutheran Church, a lifetime member of the VFW Post 1865, the American Legion Post 21, the Tactical Air Command (TAC) Tankers Association; he also belonged to the 622nd Air Refueling Squadron, the Senior Center and the Moose lodge 286.

In his younger years he was an avid skier and enjoyed long jumping, attending many events.  Andy and Carol enjoyed traveling in an RV trailer for many years attending many of his Air Force reunions and visiting friends and relatives up north and down south.  He also enjoyed visiting with friends at McDonalds.  Andy enjoyed watching the Milwaukee Brewers, Green Bay Packers and the Wisconsin Badgers.

He is preceded in death by his parents, a sister LaVerna, a brother Everett, his in-laws Jack and Ellen Gerber, a son in infancy and a daughter-in-law Valerie Anderson.