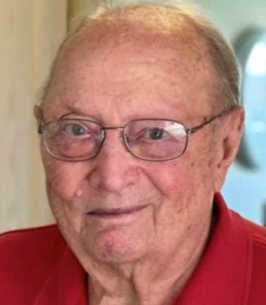 Born on May 21, 1923, in Frederick Town, PA, to mother, Mary (Corso) and father, Casimiro Dalla Santa. Al, along with his sister, Jeni, were raised by their father and maternal aunts, Emily and Giovana, after Mary passed early in their lives.

At the age of 19, Al was drafted into the US Army to serve his country during WWII. While serving in Europe as a medic, Al was captured and held as a prisoner of war and was later liberated from German forces in 1946. After his service, Al moved to Kenosha, WI, where he met and married his wife, Josephine (Furlin) on May 20, 1950.

Al was employed at American Motors in department 838 for 30 years and retired as Superintendent.

He was preceded in death by his wife of 68 years, Josephine, and his sister, Jeni Murphy.

Al will be forever remembered for growing large tomatoes both at his home and at Library Terrace where he resided for the last four years. He will be celebrated as an avid hunter, fisherman, golfer, coin collector, and accomplished Bocce player at the Kenosha Alpine Club, of which he was a founder and lifetime member.

The family would like to thank the staff at Library Terrace Assisted Living for their compassionate care and friendship, and to Hospice Alliance for their assistance this past year.

Visitation will take place on Wednesday, September 21, 2022, at Proko Funeral Home, from 10:00 a.m. until the time of service at 12:00 noon. Interment will follow at Sunset Ridge Memorial Park with full military honors. In lieu of flowers, memorials made to Hospice Alliance, 10220 Prairie Ridge Blvd. Pleasant Prairie, WI 53158, would be appreciated by the family.