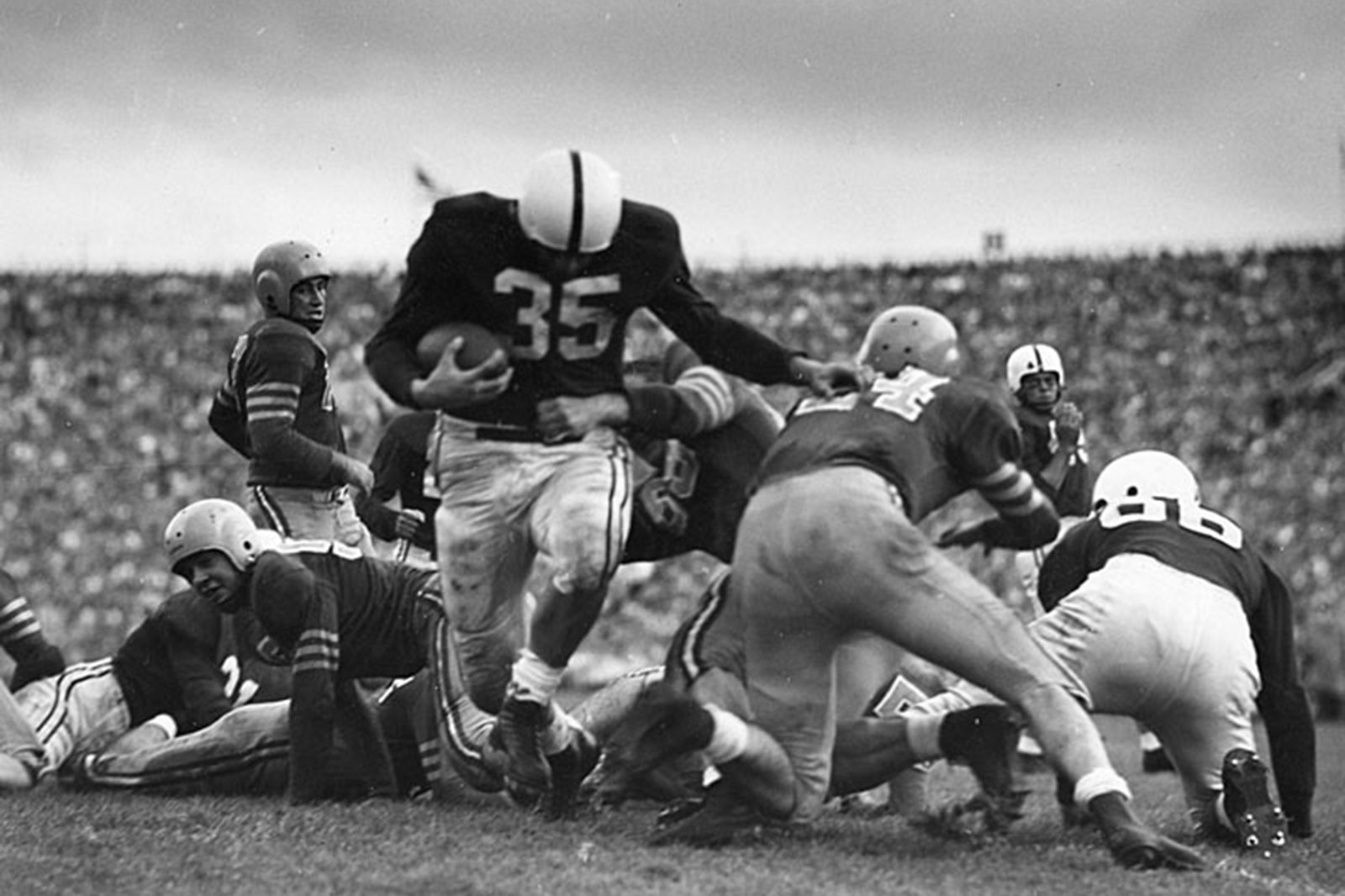 This Date in Kenosha Sports History: 'The Horse' gains 133 yards in 7-0 loss to USC

On this date (Jan. 1) in 1953, Kenosha’s Alan Ameche turned in one of the greatest games in Rose Bowl history.

Unfortunately Ameche’s Wisconsin Badgers lost to the University of Southern California, 7-0, before 101,500 in Pasadena, Calif., in the school’s first appearance in the “granddaddy of them all.”

Ameche, a hard-charging fullback, gained 133 yards on 28 carries in a performance that would land him posthumously in the Rose Bowl Hall of Fame in 2004.

“He was awfully tough on those 5- and 6-yard plunges but you can’t tell me he weighs only 205 pounds,” USC coach Jess Hill said in reports of the day.

Ameche, a sophomore, had a stellar season, leading the Big Ten with 721 rushing yards in league games while setting an overall school record for the second consecutive campaign with 1,079 yards.

His exploits helped the Badgers, who were ranked No. 1 during the season, to a share of the Big Ten title with Purdue for the school’s first league crown of any kind since 1912. When Wisconsin received the Rose Bowl nod from the Big Ten, it ignited a wild celebration in Madison.

“The University of Wisconsin campus became the scene of celebration as word spread quickly that the Badgers had been chosen to represent the Western Conference in the Rose Bowl football classic,” the Associated Press reported in stories published on Nov. 24, 1952.

“Shouting, cheering students formed snake lines and parades through the Memorial Union hub of student activity into other school buildings and along Langdon and State Streets.

“Coaches, players and faculty members joined the celebrations and indications were that there would be no more classes today.”

Though he was only a sophomore and still two years away from winning the Heisman Trophy, Ameche was quite the attraction in “La La Land,” according to the Kenosha News.

“Alan Ameche was perhaps the most photographed member of the Badger delegation,” the News reported in the aftermath of the game. “Ameche was pictured with Lana Turner, Doris Day, Bob Hope, Leah Feland, the Tournament of Roses Queen, and many others. One Los Angeles paper ran nearly a half-page picture of the Kenosha fullback.”

UW and Ameche were tasked with solving Pacific Coast Conference champion USC, which possessed the nation’s No. 1 run defense.

The fact that the Badgers were without injured halfbacks Harland Carl, Bill Hutchinson and Roy Burks really put the pressure on Ameche.

And as he did throughout his football career from Kenosha High School to the NFL’s Baltimore Colts, Ameche delivered with the second-highest Rose Bowl rushing output at the time.

“The Horse” spearheaded a rushing attack that accumulated a whopping 211 yards. Most of those, though, came between the 20s.

Wisconsin had five drives stall inside the Trojans’ 21-yard line.

Ameche looked to have the Badgers cooking early in the third quarter when he broke free and galloped 54 yards before he was corralled at the USC 33.

“We saw Alan break loose for a long gain and we thought he was going all the way,” UW defensive end Jerry Wuhrman said in ‘Alan Ameche, The Story of the ‘Horse.’ “Unfortunately, somebody caught him from behind.”

A fumble halted that drive and the Trojans were able to turn the miscue into the game’s only score as the Pacific Coast Conference notched its first win since the Rose Bowl established its exclusive alliance with the PCC and the Big Ten in 1947.

The Badgers squandered two other chances inside the red zone, including one march that reached the 3.

“We just couldn’t put it over,” Ameche said in the Kenosha News. “We could move the ball from 20 to 20 but something always seemed to pop up when it looked like we could go all the way.”

Ameche wasn’t the only Kenoshan who had a big game for the Badgers.

Freshman Paul Shwaiko, a Bradford graduate, played every down on defense, handled three punts and came up with an interception. He also missed a field goal.

Notes: Ameche was thrown for a loss three times in the game … Other Kenoshans in California for the Badgers (according to the News) were Ed Ronzani and student manager Dino Laurenzi … The Kenosha News of Jan. 2, 1953 reported hundreds of Kenoshans were at the game. … USC quarterback Rudy Bukich, whose touchdown pass accounted for the game’s only score, was the MVP. He later played for the Bears and was a guest at Holy Rosary Sports Night on Feb. 13, 1966 along with the Cubs’ Ernie Banks, George Altman and Dick Ellsworth, the Packers’ Jim Grabowski and legendary Braves’ announcer Earl Gillespie. … Ameche’s rushing yardage was second in Rose Bowl history to Stanford’s Bobby Grayson’s 158-yard game in 1936. … Wisconsin finished 6-2-1 and ranked 10th by the coaches and 11th by the Associated Press while USC finished 9-1 and ranked fourth by the coaches and fifth by the AP.